Take a Walk along the World’s Most Famous Avenue

A short walk along the Champs-Elysées shows you exactly why it is referred to as “the most beautiful avenue in the world”. Yet, even though the avenue is famed for its attractiveness, there’s far more to do than simply marvel at the sights. The Champs-Elysées is the place to go in Paris if you’re looking for unrivalled shopping, culinary delights and a range of cultural things to see and do.

Sights on the Champs-Elysées

The Champs-Elysées runs from the Place de la Concorde to the Place Charles de Gaulle, with 1.2 miles of discovery awaiting you in between; but it is at either end of the avenue where you will find its most prominent landmarks.

Place Charles de Gaulle is where Paris’ second most iconic feature (after the Eiffel Tower) resides; the Arc de Triomphe. Though the exterior of the Arc warrants closer examination with its domineering arches, and intricate carvings depicting scenes of Napoleon’s famous victories.

A trip up the monument’s 284 stairs is a must, as it reveals an excellent panorama of the city and delivers the best views of the Eiffel Tower, especially at night when the 324m iron structure is illuminated. Also located at the top of the 50m tall structure is its museum; which divulges the rich history of the monument – beginning with Napoleon Bonaparte, for whom the Arc was commissioned in 1806 to honour those who fought in the Napoleonic Wars.

The structure was eventually completed in 1836, 15 years after the great Emperor’s death. He would however make the spiritual journey down the length of the Champs-Elysées during his state funeral, after his remains were returned to France in 1840.

At the other end of the Champs-Elysées lies the Place de la Concorde, recognisable today by the many statues and fountains that adorn the square. Remembered as the focal point of the French Revolution, it was here where many nobles lost their head to Madame Guillotine, its most notable victims being King Louis XVI and Marie Antoinette.

One of the square’s most recognisable features is the Luxor Obelisk; the 23m tall column that serves as an impressive centrepiece. The 3,300 year old yellow granite structure arrived in France in 1832, after making the 3 year trip from Egypt (quite the feat considering it weighs 250 tonnes) and famously wears a gold-leafed pyramid cap on its peak.

What to Do on the Champs-Elysées

The Champs-Elysées is home to a number of luxury brands, with the likes of Chanel, Lacoste, Cartier and Hugo Boss delivering your fix of Parisian opulence; but in recent years the street has broadened its appeal with the introduction of high-street names. Adidas, Levi’s, Abercrombie & Fitch, Zara, the Disney Store and Banana Republic are a few of the many retailers who have set up shop on the avenue; and the majority offer unique shopping experiences such as innovative art installations displayed in Levi’s, and free personalised shopping at Banana Republic.

Avenue Montaigne, which runs parallel to the Champs-Elysées, is the place to go if you’re looking for the definitive Parisian luxury shopping experience. Its surplus of shops specialise in haute couture and ready-to-wear fashion; boasting the likes of Louis Vuitton, Gucci, Ralph Lauren, Fendi, Prada and Dolce & Gabbana on its extensive list of high-end fashion-houses.

Once you’ve shopped until you’ve probably quite literally dropped, the avenue is also home to some of the finest restaurants in the city, making replenishment a gastronomic delight. Notable establishments include Pavillon Élysée Lenôtre, which has been serving its famous desserts since 1900. Located in the gardens by the Rond-Point end of the avenue; the restaurant is particularly amiable in the summer when you can dine on its terrace. For Michelin star dining on the Champs-Elysées, Three star Ledoyen is located next to the Petit Palais and is overseen by master of French cuisine, Yannick Alléno.

Though the Champs-Elysées is not famed for its cheap cuisine, should you be looking for more affordable replenishment, there is also no shortage of traditional French cafes and bistros offering inexpensive local delicacies.

The Champs-Elysées, on top of its shopping and fine-dining is also one of Paris’ cultural hotbeds. Various museums, including the Grand Palais, the Petit Palais, the Palais de la Decouverte and the Espace Culterel Louis Vuitton all frequent the avenue, allowing you the opportunity to lose yourself in Paris’ affluent history; and for a more contemporary fix, head to one of the many cinemas, theatres or nightclubs that also make their home on the Champs-Elysées.

An Avenue for all Seasons

If you’re wondering what time of year is best to visit the Champs-Elysées, don’t. The real beauty of the avenue lies in its cooperation with all the seasons; each reflecting the avenue in an individual light.

Spring heralds the return of life to the Champs-Elysées, bringing colour to the numbering trees and gardens; making for a wonderful time to enjoy walks along the avenue, when there are less tourists about.

Summer sees a huge influx of visitors to the avenue, and claiming a chair in one of the many cafes is a competitive business; but nonetheless, Paris in the summer is a joy to behold, and the Champs-Elysées is undoubtedly one of the best spots in the city to soak up the sun. Summer also marks the return of the Tour de France, when the avenue every year becomes the concluding point of the race; which is signalled by the thousands of Parisians and tourists who flock to the Champs-Elysées to see the famous yellow jersey cross the finish line.

Autumn, like spring is a pleasant time to enjoy walks along the avenue when there are fewer tourists about. The month is also when France’s Armistice Day remembrance ceremonies take place by the Arc de Triomphe; which is attended every year by the French President.

Winter brings an otherworldly transformation to the Champs-Elysées, when every year the avenue is illuminated with Christmas lights from around mid-November. The return of winter also sees the avenue take on a new role as home to its revered Christmas Market, offering stalls packed with handcrafted goods and seasonal delicacies. Visitors can also expect ice-skating and the world’s largest Ferris wheel, both of which are located on Place de la Concorde. 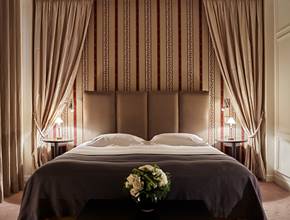